Its funny that outside US, football is an altogether different sport. So, like other things, my transition to American football took its time. Prior to coming to BYU, I had heard a lot about its football team. I couldn’t get an all-sports pass but I hoped to attend at least one football game at the huge LaVell Edwards Stadium.

I got the ticket, and I was all pumped up for the game. The only problem left was, I had no idea how American Football is played. All I knew was, each team tries to get the ball on the other end of the field where there is ‘a’ line that is supposed to be crossed. So, I looked it up on the internet, learned the basic things like positions and rules. Youtube definitely helped a great deal. After watching all that, not only had I become a BYU football fan, but also the sport in general.

Finally, it was game-day. Busy roads, traffic diversions, and the color blue everywhere. We got there a little late and the game had already kicked off. Soon, with BYU’s first touchdown, we were singing “Rise and Shout, The Cougars Are Out.” I ended up screaming so hard, that I temporarily lost my voice (but it was definitely worth it!)

Looks good, till that last part. 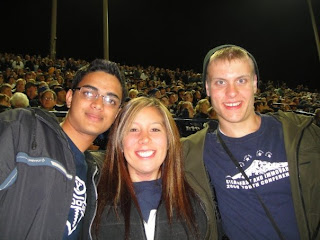 After the game, we decided to order a pizza so we called Pizza Hut and placed our order. When we went to the pizza hut on North Canyon Road, we found out that we had accidentally placed the order at their Springville branch. So, we ended up canceling that order, putting up a new order and waiting another hour to get $18 bucks worth of pizzas only for $8. That night turned out to be one the most amazing nights I’ve had since I’ve come to BYU. It was the perfect escape from the hectic college workload. I’m really glad I had the opportunity to enjoy that night with my best friends, Stacey and Andrew.